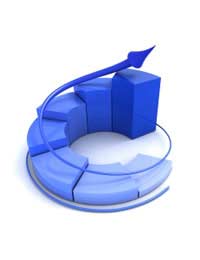 Confidence is a notoriously fragile thing. Newspaper headlines often shout about ‘market meltdown’ and ‘financial collapse’, and the paradox is that the louder you shout, the greater the panic. But if you understand how the economic cycle works, it can help you to take a more balanced approach to investing, and help you put long-term gains ahead of short-term concerns.

The economic cycle – or business cycle – is a phrase used to demonstrate how human behaviour plays the most significant role in the growth and decline of financial markets. Investors are often driven by their emotions, sometimes by greed and sometimes by fear. These impulses are both rational and irrational reactions to events, and they ensure that the world of finance is continually moving from one stage in the cycle to another.

The economic cycle can be broken down into four key stages:

The first phase is known as the recovery phase, because it follows the lowest point in the cycle, the recession. After a recession, the low level of the market allows room for optimism to grow. Consumer spending plays a prominent role in the recovery phase, and the more that people spend their money (at the expense of their savings), the faster the recovery will take place. Increased spending leads to greater business prosperity and productivity. This in turn has a positive effect on wages, which helps to further increase spending. The accumulative effect of this spending will in turn lead to a period of economic expansion.

Economic expansion is the boom time, when spending is at its peak, production is at maximum and unemployment is at its lowest. Consumer confidence is sky high and the more people spend the more prosperous everyone seems to be. The cost of finance is cheap, so why would you be saving when you could be out spending instead? This is the time when market sentiment starts to become unrealistic, as there’s a feeling that there’s no end to the prosperity, and no limits to the amount of money to be made. Yet, the economic cycle tells us that after expansion, there follows an inevitable decline.

Why is the decline inevitable? Because it occurs due to the secondary affects of the economic expansion. When the demand for products and services is increased, businesses tend to increase their prices (inflation). They also look to expand, and will borrow more money to finance this, which makes sense at the time, because borrowing is usually cheaper and easier to obtain during a period of expansion. However, as the demand for borrowing increases, the costs start rising. After a while, increased prices and higher interest rates are going to be felt by consumers, who can no longer afford those products and services that they have been used to. As spending starts to slow down, businesses look to protect their profits by trimming their expenses. The most expensive – and most expendable – asset of a business is its staff. Unemployed consumers are unable to continue spending, which means that more and more businesses have to cut costs. The very definition of a vicious circle!

Recession is the lowest point in the economic cycle, when the good times are well and truly over. Salaries start falling, goods and services are too expensive and unemployment starts rising. During relatively mild recessions, businesses and consumers may simple have to cut back on their spending, rely more heavily on their savings and simply tough it out. However, if the recession is more severe and long-lasting, the impact could be greater, including stock market crashes, bankruptcies and mortgage-payers losing their homes.

However, there is always an end to the gloom. After a while the lack of demand for goods and services, and lack of demand for credit, will see prices be reduced and interest rates start to fall. Goods will soon appear to be ‘cheap’ again, and consumers will feel that interest rates are low enough for them to take on additional borrowing. The money gets ploughed back into the economy, and recovery is underway.

The important thing to remember about the economic cycle is that it is virtually impossible to predict when one phase will end and another will begin. Therefore it makes sense to understand the economic cycle and to try and to try and apply it to your own personal circumstances. When you are enjoying your own phase of expansion (your salary is rising, your company is expanding and your house is increasing in value), set some savings aside to cope with times of less prosperity, keep track of your money and try to keep your debts down to a minimum. When the economic climate gets more uncertain, you’ll be glad you did.