Home > Mortgages > What is 'Zopa' and How Does it Work? 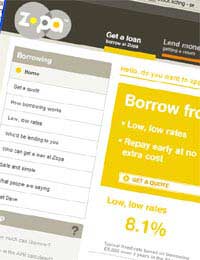 Have you reached boiling point with your bank? Have you been refused a loan because of your banks tighter lending practices? Are you tired of the tiny rate of interest being paid on your savings? If so, then you might find that a ‘person-to-person’ lending agreement from a company such as Zopa might be just the change you are looking for.

Because there are no banks or advisers to pay, the rates of interest on offer are considered far more competitive than those you can expect to pay (as a borrower) or receive (as a saver) on the high street. In other words, Zopa is the Ebay of money lending. It is estimated that Zopa currently has over 200,000 members and has been responsible for over £25 million in loan applications.

If you are looking to borrow money via Zopa, you will still need to make a formal application and provide details of your credit history. The minimum age for Zopa borrowers is 20 (for lenders the minimum age is 18) and you must have a current account with which you can make regular repayments.

All would-be borrowers are given a thorough identity check and must also pass a credit score. The aim with Zopa is to encourage responsible lending, so only the most credit-worthy applicants will get through. People with County Court Judgments, high debt levels or a bad history of debt repayment will not meet Zopa’s borrower criteria.

Once a borrower is approved, they are placed within one of five credit markets (ranging from A-star, A, B, C and ‘young’, depending on how highly they score. Once a borrower joins Zopa, they can look to arrange a loan with Zopa’s lenders.

Zopa is proving increasingly popular with people who have cash savings sitting on deposit in a bank, but earning a very small amount of interest. Whereas most high street savings accounts are now paying less than 1.0% in interest, Zopa says that over the last twelve months its lenders have received an average annual return of 9.1%. The rate can increase to 12% if the lenders are prepared to lend their money to borrowers in the C and ‘young’ categories.

A lender is able to lend any amount between £10 and £25,000, and can choose the markets they wish to lend to, depending on the level of risk (and potential bad debt) they are prepared to accept. You can also set the time frame you want to lend your money for, usually between three and five years.

How Safe is Zopa?

Just like any bank Zopa sets itself a ‘bad debt rate’ – the average of money lent out that is not paid back – and they make their borrowers well aware of these rates. For example, the estimated bad debt ratio for the A-star market is 0.4% - 0.5%, and rises to 3.1% to 3.8% for the C market.

To help diversify the risk of lenders, their money is spread across a wide variety of different borrowers, so if you lend £1,000 it will be spread between at least 100 people. So, if a borrower defaults on their repayments, the loss you incur is minimised.

What are the Costs of Using Zopa?

There’s no such thing as a free lunch, and Zopa is no different. All members are expected to pay an annual fee of 1.0%, so a member lending £10,000 at a rate of 7.5% would earn £750 in interest each year and would be required to pay a Zopa fee of £100. Remember that your gains are still liable to tax.

Using Zopa is not by any means risk-free, and unlike dealing with a bank, your transactions are not covered by the Financial Services Compensation Scheme if something goes wrong. But in an era when banks have lost public trust, there are alternative ways to save and to borrow money that could be very competitive.

Negative Equity: Should You be Concerned?